While going over my evernote, I found this piece I wrote last June.  So read away!
“I have been meaning to write this piece for 2 weeks now. The last two weeks were very emotional, frustrating and tiring. My pet from here, lost her eyesight becoming completely blind, virtually overnight with a rare condition.
I am trying to still write about my memories from 2 weeks ago, though this post is going to be very uninspired because of my overwhelming situation, the brief sojourn however was too good not to write about.
Three girls, one car, long drive to sakleshpur and a stay in an estate for 3 days….
We had planned to stay at nyrit villa after finding them on tripadvisor and mostly because our top choices were booked out. Having come up with the plan just 2 days in advance, we decided to give the place a try. Mr. Satish gave us precise directions including the no. Of kms after which to take specific turns from Hassan which was really helpful though we laughed about him giving directions as “take a right turn after exactly 2.9 kms where you will be entering a gate“… 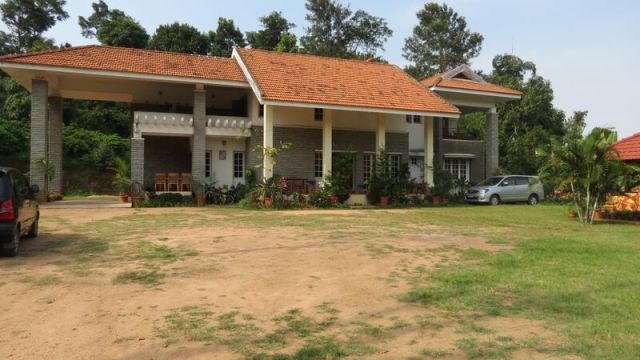 From the outside it looked as we had seen in the pictures but we were still surprised by the vastness of the property.
How about an entire 3 days spent eating local home made delicacies and drinking wine when you are not eating. And as you stroll between the house and the dining area, you have a tiny puppy running behind you, wanting to play?
That’s what we did last weekend on our visit to an estate in sakleshpur. The 3 days we spent there, we did not once feel like checking out other places in and around sakleshpur or Hassan.
We were three of us all girls who made this trip and girls… It was super fun.
While we had the owner aunty and Mr. Satish at nyrit villa made us thoroughly comfortable in the house, we had enough time by ourselves to giggle away too.
Each time we stepped out of our room, we were welcome in the living area by smiling faces and “do you want some coffee or can I make you anything to eat” and yes we did eat a lot!!
If gluttony were a gruesome sin, we would be dead by now.
Aunty and her staff made us few of the yummiest food we have ever eaten..
Malnad kadubu, akki rotti, boiled akki rotti, butter kadubu, mango milk shake, fresh produce of jackfruit, mango, banana, apple, pomegranate, coffee, tea, rice and sambar, varieties of palya, fish fry, barbecued sweet potatoes, poori sagu, jackfruit rasam, mirchi bajji, chakli, mandakki, just to name a few … Wink!
Woken up by the chirping of birds and the cries of the puppy who i named shunti, not wanting a bathe.. I went to play with him after giving him a bath and a nice lotion rub..
The farthest we made in the 3 days of our stay wAs the railway track near the villa… The track being so scenic, we took lots of pictures of ourselves there..
Here are a few pictures of in and around the homestay … That was true in every sense of the word. 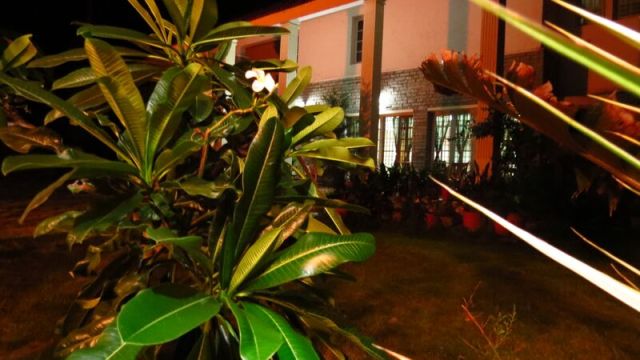 A room in the house that was rented out for the duration of the stay while the owner of the house was living there too.. You could walk into the kitchen and chat with them, sit and watch tv with them, hang around the house, take a walk in the estate, eat fresh fruits grown in their back yard, play with the dog and run free. There are bicycles and yoga mats for people who like to be fit on a holiday.. Ya we did not even wanna touch those unauspicious things :p
After spending entire days eating and taking pictures, we spent nights having wine, playing pictionary and laughing silly!
Such bliss! I wish I could buy a farm and have house in a place like that. Then I would settle down. Truly!!”